Get "BOPIS Buy Online Pick Up In Store"

Enterprise retailers see buy-online-pick-up-in-store as a must-have to remain competitive in the Amazon age, but a significant number also wrestle with the logistical challenges and fraud concerns that the popular service brings, according to a Signifyd survey of decision makers at major U.S. retailers.

The survey of 250 retail professionals at enterprises with at least $100 million in annual sales, underscored the importance of pick-up-in-store options for retailers that find themselves in the midst of a dramatic digital transformation. 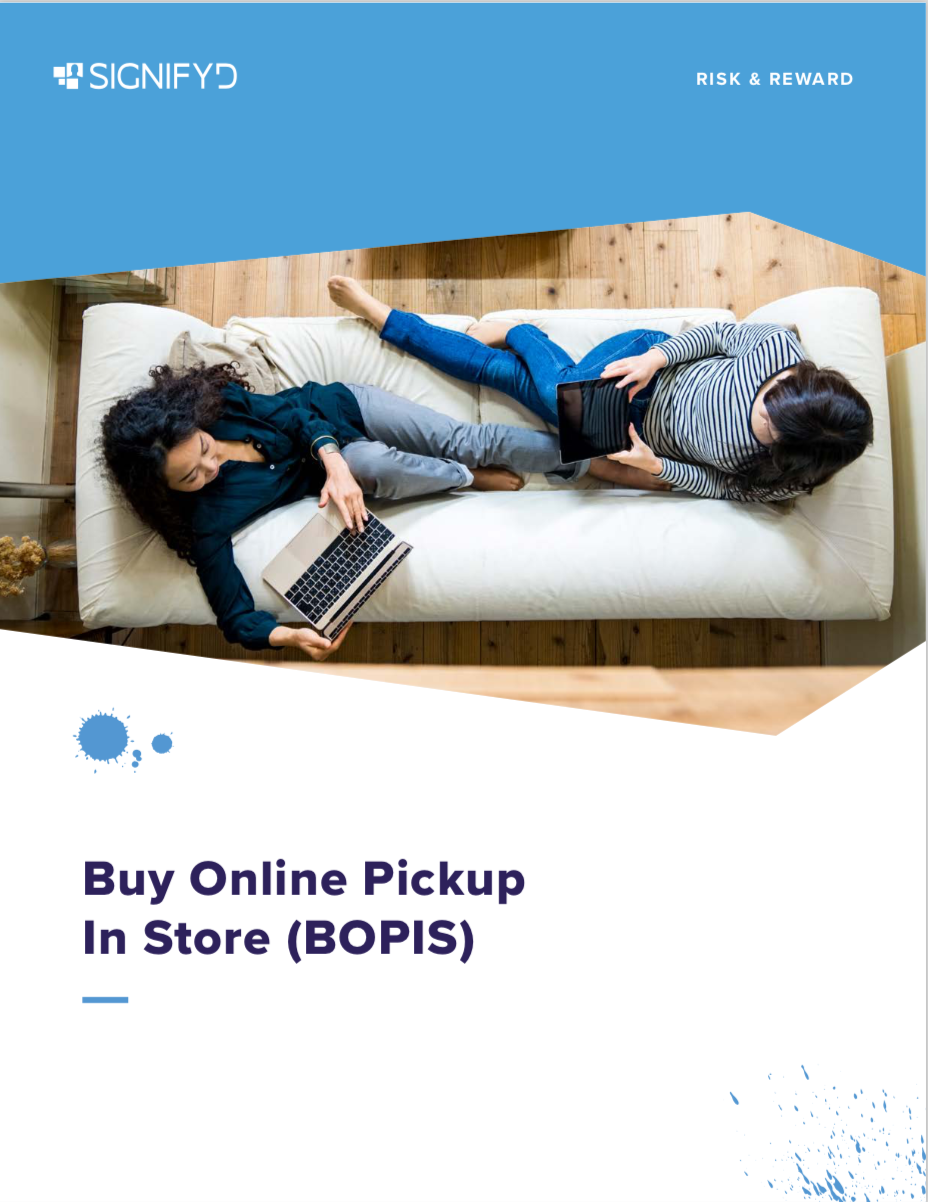 The growing importance of BOPIS as a way to appeal to empowered, buy-anywhere-anytime consumers is reflected in a number of ways — starting with numbers themselves. Home improvement retailer Lowe’s has reported that 60 percent of its online orders are collected in-store. Chief competitor Home Depot says customers come in to gather up 43 percent of their online orders. Nordstrom’s online sales grew 30 percent last year. Kohl’s saw 36 percent of its online sales picked up. Half of AutoZone’s online orders were BOPIS sales.

BOPIS features prominently in Walmart’s T.V. advertising. And, Spanish fashion retailer Zara is experimenting with using robots to handle in-store pickup, because the service has been so popular.

Millennials are helping to drive buy-online-pick-up-in-store

“You’ve got a millennial demographic, which is more and more of the purchasing power today. They want to shop differently. They also expect a certain degree of customer experience, especially from digital transactions,” says Matthew Leach, a vice president at NTT Data Services, which studied BOPIS at 15 of the nation’s largest retailers.

Retailers indicated that their biggest reason for offering BOPIS was to remain competitive with other retailers, including Amazon. In fact, 44 percent of respondents cited competitive reasons, with 12.4 percent naming Amazon as the threat and another 31.6 answering that it was competitors in general that they were worried about.

Just over 37.5 percent of respondents said they offered BOPIS to draw customers into the store, a wise strategy, given that surveys show a significant number of BOPIS customers buy additional items once they’re in a store.

NTT’s Leach talks about how the industry leaders tackle BOPIS in the video below.

Indeed, NTT’s study and a survey by JDA Software indicate that consumers are practically demanding a pick-up-in-store option. JDA found that half of consumers had used BOPIS in the last 12 months, a 43 percent increase in two years. NTT reported that 49 percent of online adults used the service — or reserve online, pick up in store — in the previous year.

It turns out, BOPIS isn’t easy

And yet, BOPIS is hardly a universal offering. The statistics on BOPIS penetration among retailers vary. Research firm L2 reported in 2017 that 47 percent of retailers in the United States and United Kingdom offered BOPIS — a finding that becomes more understandable when you consider the challenges BOPIS brings.

To do BOPIS right, retailers need pinpoint inventory accuracy, knowing on an individual basis where products are and where they need to be to meet the needs of a customer picking up in store. Retailers surveyed by Signifyd cited challenges with inventory tracking, staffing, training, fraud and return on investment as the downsides to BOPIS.

Think about it: In-store pickup requires new skills for store associates and a keener eye on fraud, because BOPIS differs from both a pure online order and a pure in-store order in important ways when it comes to fraud protection.

Unlike most online orders, BOPIS orders come with no delivery address, a key bit of information for determining whether a customer is legitimate. Not only can fraud systems and analysts match a delivery address with a billing address for a measure of assurance, a delivery address says a lot about a person and his or her order, including whether the order was placed from a spot near the customer’s home address.

And unlike in-store purchases, in which a credit card is physically present, BOPIS orders are conducted online with no card present, meaning the financial liability for fraud shifts from the card issuer to the retailer.

Retailers understand the risk: 40.4 percent said that buy-online-pick-up-in-store introduces additional fraud concerns. And while the vast majority of retailers said they had procedures in place to guard against fraudulent BOPIS transactions, 31.2 percent expressed doubts about whether their employees actually followed the proper procedures.

Despite the challenges, BOPIS is here to stay, given the competitive imperative and consumers’ demand for flexible fulfillment. And if the history of ecommerce is any guide, retailers will get better at it as technology and experience team up to chart a course to the future.

First comes the coronavirus, then comes the fraud