You could argue that this is the most exciting time to be working in the retail apparel field since the invention of clothes.

Seriously, apparel in 2018 is a retail sector that is shifting dramatically. Like all of retail, apparel owes a large part of its transformation to consumers’ move from  only in physical stores to a multi-channel approach. But to pin the changes to the apparel industry solely on the rise of ecommerce would be to oversimplify the changes that are underway.

Millennials are blowing up the concept of traditional brands by moving to upstarts and embracing house brands from Amazon, Target and others. Meanwhile, established brands are moving to sell directly to consumers. The middle of the market in clothing is being hollowed out as consumers move to either low-priced fast fashion or high-priced luxury fashion. Consumers outside the United States and Europe are being heard loud and clear. In fact, 2018 will mark the first year that more than half of apparel sales will take place outside of North America and the EU.

In short, there is a lot going on, which why Signifyd conducted a deep dive into the apparel sector to produce “Risk & Reward: The Apparel Industry’s Digital Transformation.” The report looks at the trends and challenges in a key retail sector with $400 billion a year in U.S. sales alone. Throw in the rest of the world and apparel accounts for $2.4 trillion in sales. 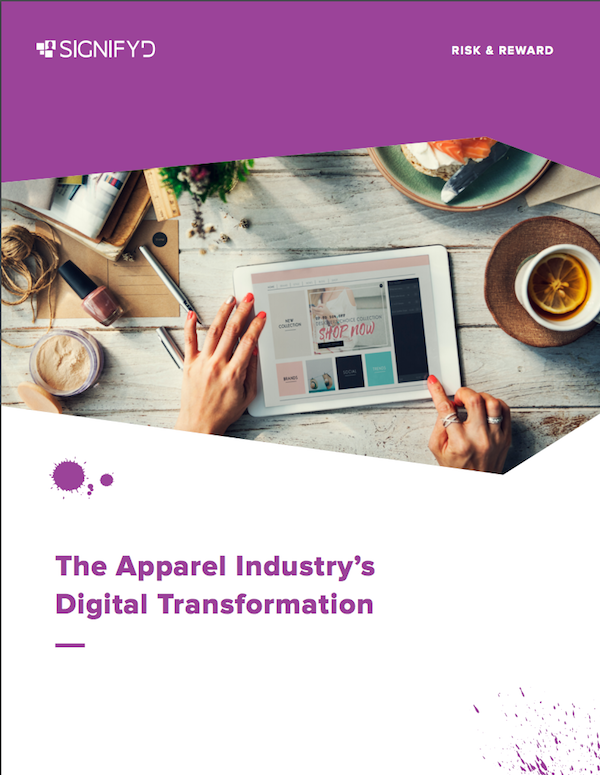 The apparel industry is moving at a rapid clip, driven by changes in fashion, technology, global markets and consumer habits. Download “Risk & Reward: The Apparel Industry’s Digital Transformation” to learn more in Signifyd’s deep dive into the state and future of the retail apparel industry.

Yes, apparel’s ecommerce sales are growing rapidly, but this isn’t consumers simply changing one way of shopping for another. Digital-first players, like Bonobos, Allbirds, Net-a-Porter and others have moved in to disrupt the sector and show legacy companies the way to consumers’ hearts.

But with all the change in the industry, some long-running challenges remain. Amazon, of course, is one. As much as 40 cents of every dollar spent on apparel online will be going to Amazon,  “The Apparel Industry’s Digital Transformation” reports. The report also looks at the industry’s response to these kinds of shifts in the market and consumers’ behavior.

A good part of the answer lies in technology — not just in terms of reaching and serving customers, but in the garments themselves. How is fashion changing and how fast is it moving? Consider a conversation we had with Grace McCarty, a senior design student at the Fashion Institute of Technology in New York. McCarty was part of a team of students that worked with IBM and the company’s Watson technology to design clothes featuring wearable technology.

The video interview below features a brief description of what she came up with.

McCarty went on to explain that the jacket she designed, through the collaboration that included Tommy Hilfiger, is GPS enabled. Remember how she talked about the feature that would change the jacket’s colors based on the wearer’s emotional state? The GPS function will ping the wearer with nearby locations that would likely elicit similar emotions, she explained.

How retailers can avoid holiday shipping surcharges with curbside pick up