The consumer electronics vertical is just now catching a wave that will mean higher sales and bigger opportunities to build customer loyalty for retailers in the segment, according to Signifyd’s latest retail industry report.

In fact, the consumer electronics story is one of redemption, according to the report, “Risk & Reward: The Consumer Electronics Industry’s Digital Transformation.” After years of disappointing sales growth, a retail renaissance is underway for electronics.

Relatively new technologies that consumers had found intriguing, but not ready for prime time, are now sparking shoppers’ desires and prompting them to buy.

The consumer electronics report, citing existing research, found that smart speakers and other smart home devices, along with virtual and augmented reality products and the internet of things in general, has renewed consumers’ love affair with gadgets. Sales of consumer electronics are projected to grow nearly 4 percent this year, up from growth of less than 2 percent in the previous year, the report says, citing Statista. 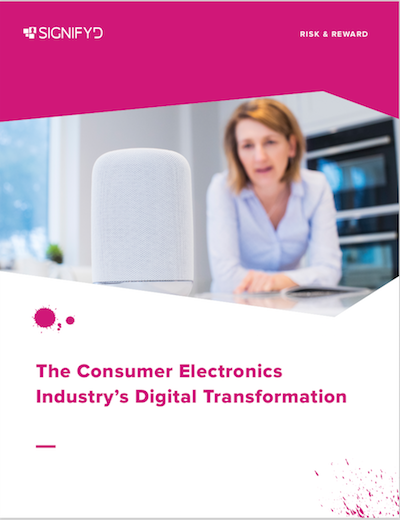 Consumer electronics retailers will see valuable opportunities in international sales, according to “The Consumer Electronics Industry’s Digital Transformation.” McKinsey noted in the report that 1.4 billion Chinese and Indian citizens will join the middle class by 2020. By 2022, the world’s larger middle class will contribute to a global consumer electronics market reaching $1.6 trillion in sales.

While most of the news is good for the consumer electronics industry, the report points out that fraud is still a concern for retailers in the sector. (Hence the “risk” in Risk & Reward.) Citing Signifyd’s Ecommerce Fraud Index, the report notes that total fraud losses in the sector increased by 9.54 percent from 2016 to 2017.

The report defined fraud losses as the sum of orders declined because of suspicion of fraud and the amount of chargebacks received from accepted orders.

Finally, the report suggested that retailers in the consumer electronics segment should double down on their omnichannel strategies in order to take advantage of the sector’s growth. In particular, retailers need to ensure that they have complete visibility into inventory, knowing where every product is and what is available for both online and in-store customers.

As a subset of those efforts, consumer electronics sellers must distinguish themselves from the competition by providing a customer experience that keeps shoppers coming back by offering services such as buy-online-pick-up-in-store, for instance.

The opportunity is here. Consumer electronics merchants have the chance to take advantage of favorable conditions that could mean added revenue in the short run and increased customer lifetime value in the long run. The trick for them is to get themselves in position to take advantage of what’s in front of them.

Customers take to G2 to declare Signifyd best in show